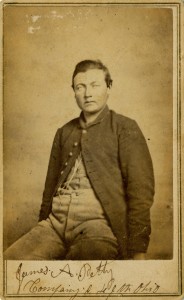 His parents were originally from the Maryland/Virginia area but moved to Richland Township, Wyandot County, Ohio prior to 1835. They were married in Athens County, Ohio. James is one of 6 siblings (4 sisters and brother Thomas Petty)

1890 Census of Veterans/Widows (see attached)
At this point he was living in Beaver Crossing, Nebraska. Notes say that he has a disability from the war: gun shot to right leg.

1910 US Census (see attached)
Shows him living in Nebraska, working as a carpenter 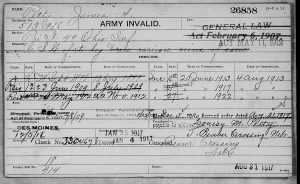 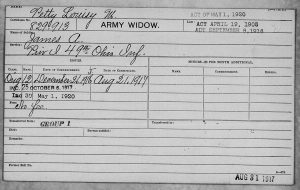 Pension & Payment Cards (at right)
One makes reference to his disability & gunshot wound. According to payment cards, he died December 5, 1916

Additionally, I found this about James on this person’s website:

Thomas Petty, was also in the Regiment. Company I, 49th Ohio Volunteer Infantry and was a musician (bugler). Thomas joined February 24, 1864 and was killed at the Battle of Burnt Hickory in 1864.