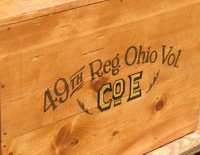 The 49th Ohio Volunteers was founded in 2013 by veteran Civil War reenactors and living history presenters John Cuevas, Richard Fehring and Jeff Lawson. Captain Darryl Hutchinson is the senior officer. Our unit is a member of The Union Army of the West, and participates in their official events. Each member of the 49th Ohio Volunteers has a voice in the activities and standards of operation for the unit. Respect, integrity and a commitment to authentically portray and honor the memory of the soldiers and civilians that bravely endured throughout those four years of the American Civil War, are the heart and soul of the 49th Ohio’s philosophy. We believe in public education through our outreach efforts and by engaging with the public at reenactment events.